Having farewelled last year’s OD4’s, we are now well in the swing of this year’s group. Over the Christmas period the regular attending Clinical Teaching Instructors seeing the patients. These include our regular 0.6 staff Tim Martin, Maria Bui and Joe Wang. Also, many of our regular casual staff come in to help us provide services during the non-teaching time from November through to mid-January: Justin Maher, Katrina Yap, Catherine Cheah Kent Snibson, Lahiru Kulathunga, Andrew Huhtanen, Russell Lowe and Luke Arundle keep seeing patients. The clinic seems to run more smoothly without the students being around, but we really miss the life and vitality that the students provide with their enthusiasm and engagement. Now that the students are back, do we think back to the quieter times?

Last year UMEyecare was able to purchase an OCTa. This has been very useful in the provision of clinical services and in the diabetic research the clinic is involved in. As an aside a PhD student the clinic is hosting, Felecia Widyaputri (an Indonesian ophthalmologist), has the honour of being granted an oral presentation at the upcoming ARVO resulting from some of her work on the natural history of diabetic retinopathy in pregnant females with pre-existing diabetes. ARVO is the largest and most highly respected eye and vision research organisation in the world. Membership includes nearly 12,000 researchers from over 75 countries.

The OCT-a has been useful to privately practising optometrists. For example, a private practitioner in the northern suburbs referred a 66-year-old female patient referred for OCT-a. The referring optometrist had previously found multilobular PED’s with effect on vision in the right eye on his own OCT. An opinion sought at the time was that the changes were benign but required monitoring. The patient had reported recent changes in vision and so the optometrists was concerned that there was a potential for change to the PED’s.

The OCT’s of the RE were: 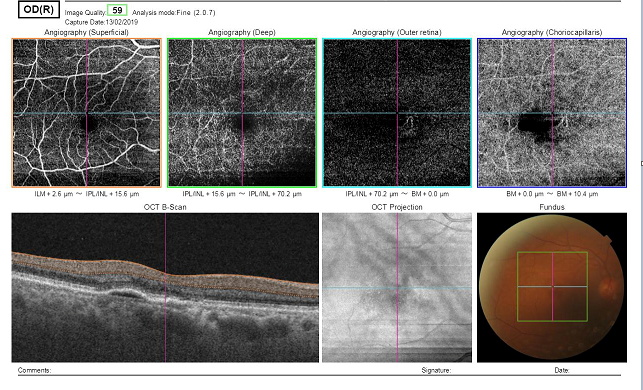 Note the small neovascular net in found in the OCT (red arrow). As a result, further specialist opinion was sought and a decision was made for no treatment at this stage. But we are to repeat the OCTa’s at 3 monthly intervals to monitor the net. UMEyecare with take the OCTA returning the results the referring practitioner to fulfil the management plan.