Launched in February at The University of Melbourne by international thought leader on servicer user perspectives Mary O’Hagan, Co-production: putting principles into practice in mental health contexts is an open-access resource developed to support consumer-led initiatives in Victoria.

Co-production is a term in frequent use in public service discourse, and the concept gained wider currency in the Victorian mental health sector when Victoria’s 10-year mental health plan named co-production as one of five approaches critical to improving mental health services.  But alongside its increase in profile, the authors observed a “lack [of] robust conceptual or practical foundations” when consumers, clinicians, health service and other agency staff sought to co-produce together.

“That’s why we felt it was important to develop this resource”, says Cath Roper. “We could see that the mental health sector needed support in learning how to adopt co-production principles and practices. Because at best, there is a very uneven understanding of what co-production is, and how it is different from ‘business as usual’ approaches”. 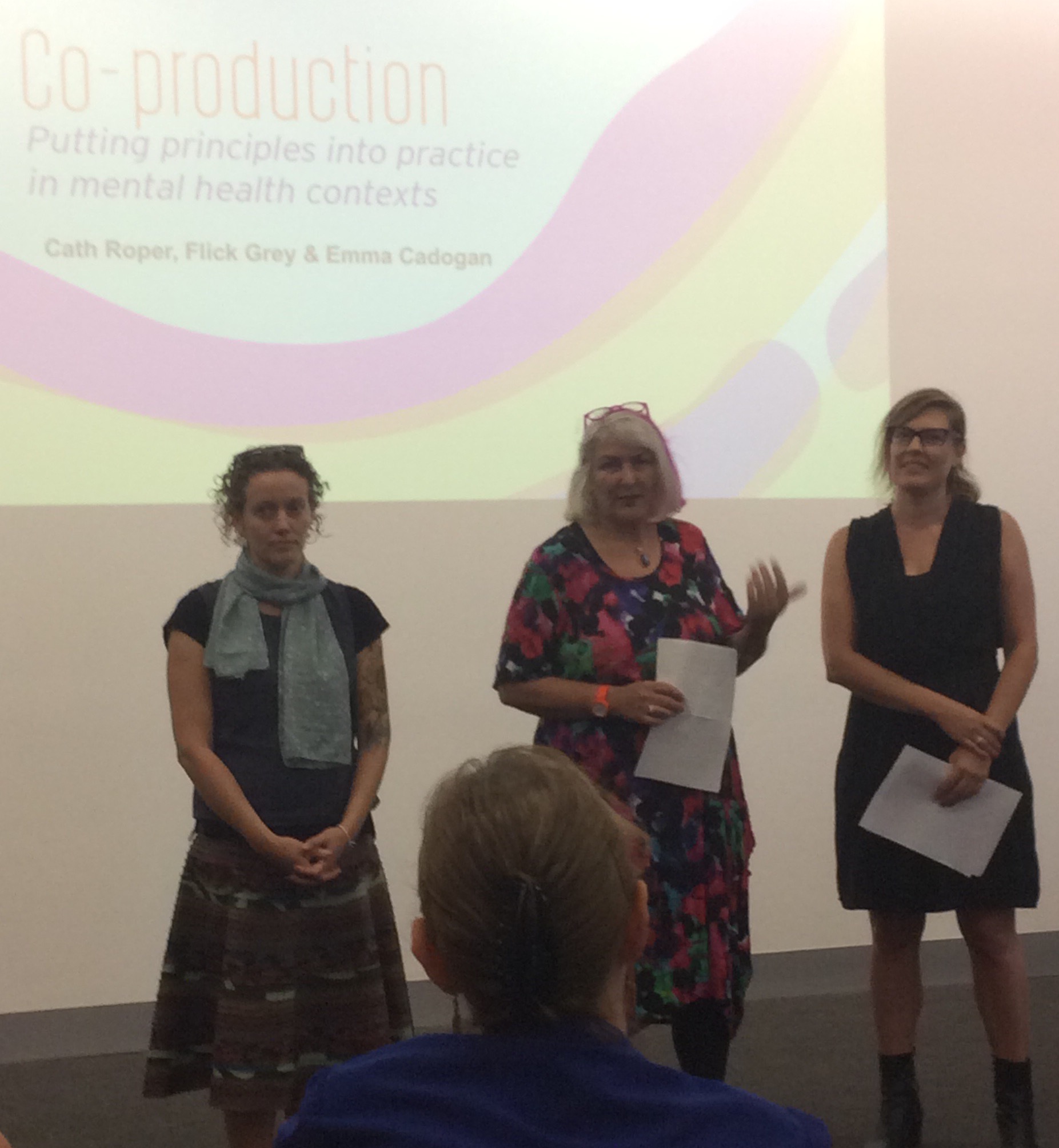 (Above; from left): Flick Grey, Cath Roper and Emma Cadogan at the February launch of Co-production: Putting principles into practice in mental health contexts

In the mental health context, co-production extends far beyond traditional consumer participation models of ‘collaboration’ and ‘participation’ after an agenda has been set. Instead, it involves consumers from the very beginning: seeking their expertise in the process of framing problems, setting priorities, designing solutions and evaluating their effectiveness. Co-production seeks to create a culture where all types of expertise are valued equally, and recognises that the quality of services is improved by the input of the people who use them.

One of the key drivers for the development of this resource was the recognition that, although a number of co-production resources exist, few speak to the co-production challenges that are specific to mental health. “There are unique considerations about power in the mental health context, not least because of the separate legislative system in place”, says Cath. In partnerships between consumer and non-consumer partners, there are likely to be considerable power differentials and “some of the partners … might have been exposed to quite extreme forms of trauma, oppression or marginalisation”.  The resource outlines affirmative action approaches for equalising power so that consumers can exert influence, including “tools to help map out power” and suggestions for how to shift power in the direction of those with less influence.

Another key principle of co-production is that consumer leadership and capacity is developed through co-production processes. Cath identifies another driver for the resource as “a passion” that she and Flick Grey share for “reposition[ing] consumers from always being learners to being leaders, and to articulate the conditions that might best support that” as another motivating factor.

“This is a resource for everyone”, says Cath, who says that the authors hope it will influence approaches to mental health work, policy development and consumer participation across grass roots organisations, government and academia.  “But we’d like to see them used to inform any kind of collaborative work when there are a range of partners, with disparate sets of experiences, particularly around experiences of influence and power”.

“We hope that the resource results in greater investment in consumer leadership and the incorporation of consumer thinking and expertise in project development across all settings and levels”.