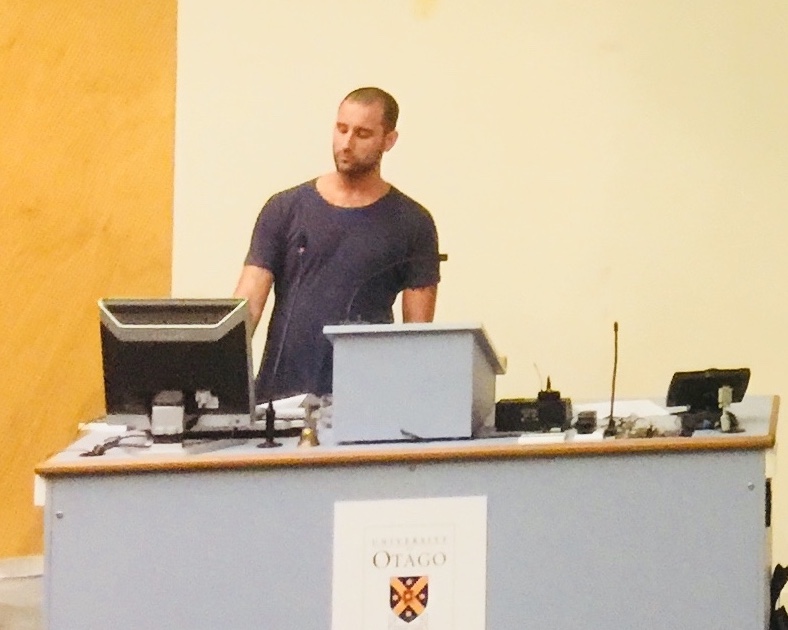 Above: CPN Consumer Academic Daniel Pintado presenting his paper "Saying versus doing: Bridging the gap between values, policy and practice for consumer consultants in mental health" at the 7th Service Users Academia Symposium

The 2017 Service User Academia Symposium was held in November at the University of Otago in Wellington, NZ, and attended by a contingent of CPN-affiliated consumer academics including Sally Buchanan-Hagen, Krystyn Smale, Daniel Pintado and Wanda Bennetts.

Run annually since 2011, the Service User Academia Symposium (SUAS) aims to advance the meaningful involvement of service users in mental health and addiction research and teaching, and to support the discipline of service user academia.

Wanda Bennetts delivered the opening SUAS keynote, in which she canvassed the complex ethical and practical issues of representation as she has come to understand them through her 17-year career as a consumer consultant for organisations including NorthWestern Mental Health, Independent Mental Health Advocacy and the Victorian DHHS, as well as the CPN.

It was a subject she sought to spotlight because, she says, “I feel strongly that there are many ethical and practical issues that aren’t being acknowledged or explored when consumers are asked to be representatives”.

“Often, I feel people aren’t really thinking about what it means to ask for – or to act as - a [consumer] representative", says Wanda. "Perhaps, when an organisation or group asks for a ‘representative’, what they might really be asking for is expertise on a particular topic, and not a representative view. Has someone who is being called a ‘representative’ really been endorsed or voted on by the people they are representing?”.

The CPN’s Daniel Pintado was the recipient of one of two 2017 SUAS scholarships for consumers involved in early career mental health research and/or teaching. The scholarship was awarded in support of a paper that took as it’s starting point the fact that consumers employed as consultants in organisational settings often experience a ‘gap’ between what a mental health service claims to do and what it actually does, with respect to workplace policies that purport to be trauma-informed and recovery-oriented.

“The fact that organisations claim expertise on mental health, but don’t extend this understanding to their employees … impacts workers’ emotional health. Many become disenchanted, blame themselves, and quit,” says Daniel. His paper explored specific ways in which trauma-informed policy, processes and supervision might mitigate this impact.

“People look to each other to gauge what’s appropriate in any given situation. If we start by  acknowledg[ing] the ‘gap’, we take responsibility for - as well as help to validate, rather than deny – experiences of incongruence”, says Daniel. “This creates a respect, integrity, and helps lead to an honest discussion about what needs to change”.

The Centre for Psychiatric Nursing is pleased to announce that we will be hosting the 2018 Service Users Academia Symposium at the University of Melbourne's Parkville campus.

“The Service Users Academic Symposium is becoming a ‘must go’ event for anyone interested in user-led innovations and co-production in mental health”, says CPN Director Assoc. Professor Bridget Hamilton. “Mental health nurses benefit greatly from the insights and passion of consumer academics, and we are delighted to host a critical mass here in our city in November next year”.

For updates on 2018 SUAS programming & registrations, subscribe to the CPN e-newsletter. The 2018 SUAS will be held during  November, with dates to be confirmed in the early new year.